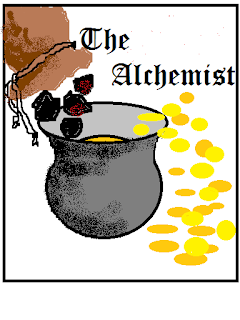 As some of you may know, I recently gave a cooking demonstration at my local pub and the experience has left me with two questions:


Firstly: is it possible for a local lad to promote himself in his entrepreneurial endeavours without being reduced to ridicule?

My second question is: Why does the statistical data for population in my area show that there is a deficit of young men compared to other population groups? Where do they all go?

Okay, so that's three questions altogether but who's counting?

Alright, so I am, and now that's four questions. I could go on. But first questions first.

And if anyone has a sausage recipe I would love to use it in my book.
Posted by Jack at 4:28 PM 3 comments:

As all you out there are probably aware we are in the middle of a world wide credit crunch, an economic period so bleak, the likes of which we haven't seen since John Major handed over his plate of peas to Tony Blair, that publishers aren't publishing books and are leaving début writers like myself no option but to blog themselves senseless in the hopes of some recognition. And maybe, at the end of all of this, I'll have achieved the status of author instead of the dubious banner I currently reside under, unemployed and not claiming. So I've devised a plan.


In this age of economising and frugality two things occurred to me that we should all be doing: number one, tightening our belts, and number two, getting what little enjoyment we can out of our miserable existences. This is the basis of my plan.

It seems to me more and more inappropriate for the times that celebrity chefs and the likes should be banging on and on about what the country should eat and where they should buy what ingredients. I mean, what planet are they living on. Obviously they aren't having to cut their cloth to the same measurements as the rest of us. So that's why I've decided to become a celebrity chef, not like all of those famous ones on tv but a chef of the people.

Out with gourmet ingredients, big budgets and tasteless un-filling healthy recipes, people want tasty comfort food that's affordable and easy to prepare, and I'm not talking about injecting lashings of MSG into breakfast cereals either. And that's where my proposed book comes in: Fifty Ways to Cook a Sausage. I've got just one obstacle in my path. Actually two but only I can learn to cook myself, myself. (Not cook myself as in put myself in the oven, just to clarify that last point). But I'm hoping you can help me with the other.

I need recipes. I'll post them as they come in. So there you have it. You have two choices: help the celebrity chefs feed their bank accounts at the expense of our happiness and out of our pockets, or help me to become the people's chef.

This country, the world, needs you. All I need are your recipes.
Posted by Jack at 3:49 AM 5 comments:

Eyup, my name's Jack. I'm new to blogging, actually my sister, Doll, set this up for me, to help me realise a dream of mine: to become the working man's celebrity chef.

Drop me a comment, or better still, a sausage recipe!